There has been a flurry of announcements in the news recently about low-Earth-orbit satellite constellations, which are primarily expected to be able to provide wideband internet anywhere in the world. Many of these satellite networks will require lasers that are cost-effective and able to survive the rigors of space. Missions to the moon and planets typically require high bandwidth to accommodate such scientific demands as hyperspectral imaging. To provide sufficient power and signal strength to ground stations, custom high-power laser diodes may also be necessary for some space missions. Consequently, long-lifetime lasers for harsh environments are becoming increasingly important. There are several key factors related to designing a laser module for long life in space. 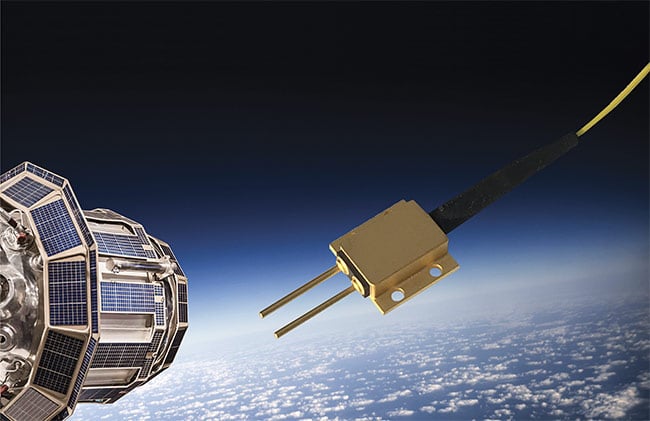 The rigors of space

The extreme environmental conditions found in space push the physical limits of nearly every scientific technique, process, and component. For a spacecraft to succeed, all components, including lasers, must not only survive these conditions but maintain performance as well. Space organizations will frequently choose a laser based on its ability to penetrate the atmosphere and transmit through water vapor. Coincidentally, these wavelengths are similar to traditional telecom wavelengths, but standard telecom packages are not designed for the rigors of space.

When lasers travel into space, they may be required to operate for two-plus decades without repairs or recalibration. They will be exposed to temperatures ranging from -55 to 85 °C, from the chilling darkness behind the Earth to the extreme heat of the sun. They will also be exposed to high mechanical stresses, including severe shock and vibration. Designing a laser for success in space is particularly demanding because size, weight, and power must be as small as possible to minimize launch cost.

Thermal cycling is an area that challenges laser manufacturers because the different thermal expansion coefficients between the materials within the package can result in varying power levels coupled to the fiber. Over time, these differing expansion rates cause the package to shear itself apart. The ability of the laser to prevail and survive in a hostile environment depends on reworking the way a diode laser chip is designed and mounted within a package. Long-lifetime lasers are required to survive thousands of temperature cycles; even military-grade laser diodes typically cannot survive more than 500 cycles. Ultimately, the characteristics of space provide the ideal environment to test and perfect extreme reliability.

In a typical laser diode design, there are several layers of various metals and solder between the laser chip and the package. The solder connects the chip to a submount, which is connected by another solder to a base mount, which in turn is connected to the package by another layer of solder (Figure 1). Each layer represents a potential thermal expansion mismatch, and when subjected to extreme cycling tests, the metal matrix of the solder can break apart.

Figure 1. Illustration of a die, submount, and package. Courtesy of Sheaumann Laser Inc.

Thus, materials should be selected based on three key criteria: 1) high thermal conductivity to remove heat from the die; 2) compatible thermal expansion through the metal stack; and 3) material strength to maintain structural integrity under high shock and vibration. Through effective design, thermal stress between the layers can be minimized. This type of laser module is able to survive over 2000 temperature cycles and the high g-forces and vibration profiles associated with launch.

When lasers travel into space, they may be required to operate for two-plus decades without repairs or recalibration.

An essential part of achieving long lifetime is optimization of the thermal performance of the die itself. If a chip becomes too hot, it will be stressed and burn out over time. The better the heat dissipation, the longer the life of the laser.

Designing the best metal layers and thicknesses to avoid high thermal impedances between the layers is critical. It requires multiple layers of metal to be deposited on the gallium arsenide (GaAs) chip that thermally couples the die to the solder and connects it to the submount (Figure 2). If layers are not correctly chosen, heat reflects back to the chip. Although modeling tools are available to help with this task, decades of experience are necessary to master this art; the technique is so subtle, it has not been fully captured in modeling tools. The chip must reliably operate at very high junction temperatures.

In addition to surviving the harsh environment, the laser module must also maintain its optical performance. Thermal expansion moves the fiber relative to the aperture of the die and reduces the light coupled into the fiber. To maintain consistent power into the fiber, the system must be made less sensitive to this movement. One novel approach to reduce sensitivity requires a change to the quantum well structure of the die to alter how the light is emitted from the aperture. This results in higher coupling into the acceptance angle of the fiber.

An in-house packaging and laser die design system can enable the creation and fabrication of unique die structures. By altering the physical properties of the beam emitted from the die, it is possible to maintain consistent power into the fiber across the required temperature range.

Beyond thermal management, package hermeticity also represents a challenge. High levels of hermeticity are directly related to laser lifetime. Telcordia specs are two orders of magnitude lower than what is required for a laser to survive for 25 years in space. One way to achieve these levels is with a novel process that seals the snout of the package together. The ability to test the package for fine and gross leaks at these levels requires advanced procedures.

Because innovation is required for a laser module to succeed in space, traditional design rules will need to be broken and the designs remade from scratch. A company’s ability to alter its laser diode design and fabrication, along with its ability to process and package in-house, are keys to success.

Adam Erlich is director of sales and marketing for Sheaumann Laser Inc. His 25-year career in photonics has focused on launching innovative technology.